TAKING ART BEYOND PERIODS & USING ARTISTS AS WITNESSES OF THEIR TIME

Marc Restellini, born in 1964 in Saint-Omer, in the Pas-de-Calais, is an art historian and French museum director. He is the grandson of the painter Isaac Antcher. He is the founder of the Institut Restellini and is internationally recognized as one of the leading experts on the artist Amedeo Modigliani.

He is keen to see a more innovative reading of Art History based on the cross-disciplinarity of works. His novel approach as an exhibition curator has played a notable part in the modernization of the French cultural scene.

A unique project to produce a Catalogue Raisonné dedicated to Amedeo Modigliani was his brainchild, based on hitherto unused technologies and a new scientific approach. 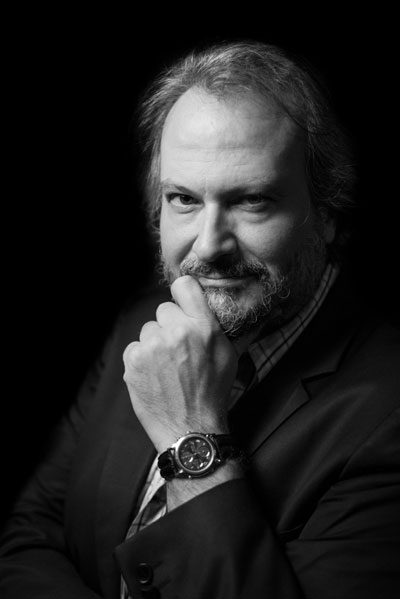 major public institutions with which partnerships have been set.

He obtained a degree in history and then a postgraduate degree in art history at the Université Panthéon-Sorbonne, where he then became a lecturer. His determination to offer the public his original vision of art history came to the fore in his first exhibition which he organized in 1989 in the townhall of the 6th Arrondissement in Paris, Portraits and Landscapes at Zborowski’s, his research topic at the Sorbonne.

Marc Restellini subsequently curated many travelling exhibitions in Japan, at the Tobu Museum among others, where he was asked to curate the inaugural exhibition in 1992. For that show, he put together a selection of Modigliani’s masterpieces, on view for the first time in Japan. For almost ten years, in Asia and in Europe, he greatly improved the system of travelling exhibitions, improving the viability of ambitious projects, while keeping them accessible to the largest possible public; one such was the Renoir exhibition, successively presented for the Mainichi-Shinbun press group, at the Tobu Museum in Tokyo, and lastly the municipal museum in Osaka, while others included Kiki, Queen of Montparnasse (1998), Georges Rouault (1998), From Fra Angelico to Bonnard, Masterpieces of Dr. Rau’s private collection (1999), Sisley (2000) and Redon (2001), to mention just a handful. On the same principle, Marc Restellini once again put on an exhibition devoted to the painters represented by the art dealer Zborowski, at the Fondation de l’Hermitage in Lausanne, then at the Palazzo Vecchio in Florence. During his years as artistic director of the Musée de Luxembourg (Sénat) from 2000 to 2003, he produced outstanding exhibitions, including in particular the retrospectives of Raphael (2001) and Modigliani (2002), which brought together 110 of the master’s works, and clocked up a record number of visitors.

In 2003, Marc Restellini decided to create his own museum, the Pinacothèque de Paris, a novel place of culture, exhibitions and dialogue between the arts in Paris. Located on the Place de la Madeleine, the Pinacothèque de Paris would swiftly enjoy considerable success and, in 2011, it added a second exhibition venue, along with its Collections. Its solo exhibitions (Soutine and Utrillo-Valadon), its daring themes (Pollock and Shamanism, Giacometti and the Etruscans), and its presentations of hitherto unshown pieces (Chinese and Mexican national treasures) guaranteed the Pinacothèque de Paris, under the supervision of Marc Restellini, an ever greater success. As a well-informed cultural operator, Marc Restellini has always reckoned that the future of culture would lie in Asia. It was, incidentally, on the basis of this shared vision that he joined forces with the government of Singapore, there to open a new Pinacothèque, in the historic building of Fort Canning, located in the heart of the City-State.

For more than a decade, his unique curatorial approach has enabled him to take part in the rich Parisian cultural debate, contributing to it a know-how culminating in the metamorphosis of the French museum landscape in terms of:

-hanging and lighting the works exhibited (close hanging and specific lighting, return to a tighter hanging of the works so that they have a greater exchange with each other)

-re-discoveries of faraway civilizations and major periods of history (the terracotta Warriors of Xi’an, the Inca, the Maya, the Dutch Golden Age, German Expressionism…)

In addition to his contributions to the world of culture, museums and exhibitions which have marked these past 15 years, Marc Restellini was also a major pioneer in the scientific sphere of Art History. First and foremost, in his studies, in the course of which he developed from his dissertation a catalogue raisonné based on the most recent computer methods which had never yet been applied to this area of human sciences. Subsequently, at Paris I-Panthéon-Sorbonne with the backing of Professor Marc Le Bot, he set up a postgraduate methodological seminar in Art History, in order to associate computer science with the research of Ph.D. students. He ran that seminar jointly with the CNRS (represented by Professor Levaillant), in order to introduce a teaching of the methodologies, which he had himself developed for his own research.

He was still a pioneer when, in 1997, at the invitation of Daniel Wildenstein, he decided to focus on preparing the catalogue raisonné of Amedeo Modigliani’s works, imposing scientific standards which had never been applied in the field of research into artworks. He thus created a new form of catalogue raisonné and the model of the Modigliani catalogue remains unique in the world: with its 600 scientific dossiers dealing with the whole of the Modigliani corpus (authentic and apocryphal alike), accompanied by systematic analyses for each work, Marc Restellini drew up a unique comparative standardization which he associated with a systematic use of any new technology, as soon as it appears. He was thus the first person to develop a procedure of comparative pigmentary analysis for the preparation of a catalogue raisonné of paintings. He was also the first person to use magnetic resonance, for a non-intrusive pigmentary analysis. In addition, he was the first, and still the only, person to systematize, for a catalogue of artworks, the use of infrared photos, and, at a later date, the first to use innovative methods such as digital procedures for “fake colours”, offering very effective results.